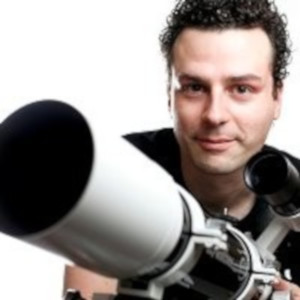 Topic – Chasing Atlantis: What Do You Do When Your Childhood Dream Literally Flies Away?

Matthew is the producer of Chasing Atlantis (www.chasingatlantis.com) a documentary film in production catalyzed by the final flight of the Space Shuttle. The film is a personal journey that explores his love of space and science fiction and the way in which we can revisit our childhood dreams.

In 2011, the space shuttle program came to a close with the final flight of Shuttle Atlantis. Amidst the crowd of nearly one million people gathered to witness the historic flight was Matthew Cimone who, from childhood, always dreamed of going to space.Determined to see this last launch, Matthew set out on a road trip with friend and filmmaker Paul Muzzin to documenting his journey and the people Matthew met at the event. But what may have been an ending changed to a new beginning with an unexpected call from the Canadian Space agency to interview Chris Hadfield and an opportunity to get up close to Atlantis following its retirement from NASA. Now a road trip became a journey back in time to understand why space fills so much our imaginations in our youth and follows us into adulthood. What is it about the night sky that rejuvenates our youth and causes so many of us to look up and dream? In this talk Matthew will give a behind-the-scenes of Chasing Atlantis’ production, show footage from the film, and talk about his insights into what he’s learned from the over 100 interviewees ranging from Bill Nye to SETI founder Jill Tarter in anticipation of the film’s release.

Inspired by Star Trek, Mathew grew up believing that life is about exploring the universe and doing good. Having studied International Development at the University of Toronto, Matthew spent 2004-2005 working in Sierra Leone, and in 2006 was named a UN Youth Ambassador. Over 70,000 people have heard Matthew’s speeches where he often combines his passions for social justice and space. His TEDx talk “Why Diamonds in Space Inspire Me to Support a School in West Africa” challenges audiences to consider the value of life from a cosmic perspective and to see the world as we do from space; without borders. In 2012 Matthew became Co-Founder and CEO of Esther’s Echo, a non-profit that supports a school for vulnerable girls and women in Sierra Leone. He is a currently a science interpreter at the at the H.R. MacMillan Space Centre  and a volunteer at the Trottier Observatory and Science Courtyard.